From Avorion Wiki
Jump to: navigation, search
This page is a page in need of (speedy) work. It might be outdated, or contain misinformation.

A drone approaching a small Xsotan ship under fire.

The Xsotan are a unique faction in Avorion, whose origins and purpose are shrouded in mystery. Their ships appear all over the galaxy, becoming stronger towards the centre.

It is impossible to affect the player's personal diplomatic relations with the Xsotan. No matter what is done, their relations with the player always remain at 0 (neutral). However, groups of Xsotan ships may become aggressive. They start neutral in any given sector, but if the player fires any turret, whether armed or unarmed, the xsotan ships become aggressive. If new xsotan ships arrive into the sector, regardless of hostility level of the other ships, the new ships are neutral towards the player until a turret is fired again. It is possible to escape hostile Xsotan ships by simply jumping to another sector. If the player returns quickly enough, the ships will still be present but no longer hostile.

It is possible, and inevitable, to encounter the Xsotan through random events which occur roughly every 12 minutes. These are announced with a message: "Your sensors are detecting short bursts of subspace signals" then, a few minutes later, one of the following:

A group of Xsotan ships will appear shortly after the second message, the size depending on the message.

If the first or second message appeared, a group of 3–4 Xsotan ships drops out of subspace, along with the text "A small group of alien ships appeared!" or "A group of ships warped in!".

If the third message appeared, a group of 6–7 Xsotan ships appears, along with the text "A large group of alien ships appeared!".

If the fourth message appeared, a group of 10–11 Xsotan ships appears, along with the text "Danger! A huge fleet of alien ships appeared!".

The strength of Xsotan ships depends on their distance from the centre of the galaxy. Near the starting sector, they have 0.5k health, no shields, and roughly 10–20 Omicron in firepower. They quickly gain strength from that point inwards. At around 175 sectors from the centre, the ships can have 35k health, the same or more in shielding, and firepower of around 200–800 Omicron.

Outside of The Barrier, Xsotan ships do not have conventional classes, such as dreadnought or frigate. Rather, they have one of three labels:

The labels indicate the size of ship, but not necessarily the strength; a large ship has a higher volume (shown in m3)–thereby increasing its health–but it may still be outgunned by a smaller ship. For example, there may be a small Xsotan ship with only 9k health and no shields, but its firepower can still be around 600 Omicron, whilst a large ship in the same sector only has 300.

Xsotan ships come in a diversity of shapes with differing manoeuvrability. Mostly, the small ships are quick and ball-like. They are the fastest, and so may reach the player first. The medium ships (labelled just "Unknown Ship") mostly have a cross-like shape and moderate speed. The large ships are very long, thin and slow–they tend to travel at roughly 30 m/s. Since the large ships are very long in proportion to their mass, they can spin out of control when fired upon (with shields down). This makes them hard to hit, especially with chain gun turrets.

Xsotan ships may possess any type of armed turret, though each ship can only possess one type. The selection appears to be random, and is not based on the size of the ship.

Within The Barrier, Xsotan ships are no longer labelled "Unknown Vessel", rather they adopt conventional battle classes (e.g. frigate and dreadnought). This does not change their appearance, behaviour or weaponry. Here the player will meet greater numbers of Xsotan ships in sectors with hidden mass signatures.

In the middle of the galaxy, a large Xsotan vessel named Xsotan Wormhole Guardian resides, serving as the final boss of the game. 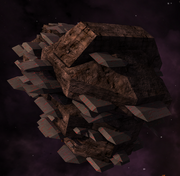 A big Xsotan breeder as it appears in the game.

When The Barrier is crossed, the player will encounter the resistance. The player will be told how they're a part of the remaining factions after the Xsotan and The Barrier first appeared, and they will be deliriously happy to hear the news about a person crossing The Barrier.

The resistance will tell the player everything they know about the Xsotan:

The Xsotan are not believed to come from the galaxy the game takes place in. They consume matter from the inside out, and they ignore anything that does not have a strong energy signature, which is why they only attack when a turret of any kind is fired. When the Xsotan are consuming something, they will turn it into "breeders". The breeders bear a shocking resemblance to some of the Xsotan ships, which can mean that the Xsotan do not build their ships, they grow them. Other than this, everything about the Xsotan is unknown; Origin, purpose, etc..