From Avorion Wiki
Jump to: navigation, search
This article is a stub. You can help Avorion Wiki by expanding it. 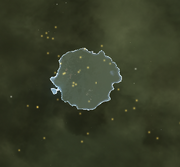 They come in a large variety of colours, each colour corresponding to the sector they lead to. Wormholes act like gates, in terms of functionality, as they allow transportation of ships through teleportation, though they don't belong to any faction. Hence, no fee has to be paid.

The distances from one end to the other are also way longer than classic faction gates, as some may take you to another side of the galaxy, usually spanning either across the galaxy or closer to the core, however, wormholes that spawn outside the barrier will not lead into the barrier.

It is generally recommended to scout wormholes with combat ships, because sometimes, but not always, a hostile faction is on the other side, such as pirates.

The route will stay marked on the map once either end of the portal is discovered.