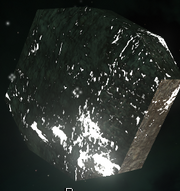 Titanium is the second material in the tier of the game. It is one of the lightest at 30t for a 1m3 cube and the second most fragile material in Avorion at 6hp for a cube of the same size.

Titanium can be feasible in an offensive standpoint with a ship built well enough due to this material being the first tier to have energy generator blocks. However, titanium ships aren't as feasible as most other materials due to the lack of shield generator blocks.

Titanium can be found anywhere in the map, however they are very rare in the far reaches of the galaxy. The easiest way to get titanium is finding it around a radial distance of 380, and mining or salvaging like the other materials..

The player can also buy Titanium anywhere in the galaxy as a resource from Resource Depots.

Titanium can be used in ships like any other material, wherein it's consumed when you build Titanium-based blocks on your ship, or when you repair the damaged Titanium blocks on a ship.

Titanium could also be used as an early-game energy generation system, where they use the initial Titanium for generator blocks.

If the player does not wish to build with it, it can also be sold to resource vendors for credits.