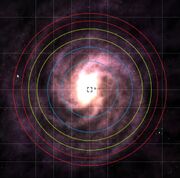 You have not heard of me yet? I am Boss Swoks III, scourge of the outer sectors. You will get to know me soon enough.

After Boss Swoks is defeated, the player that spawned the boss cannot spawn another AI or Boss Swoks for 30 minutes.

Boss Swoks is not much different from other pirate ships, except for his very high HP, and a large number of turrets. He is accompanied by 5 standard pirate ships. Due to the nature of this early-game fight, it can be a challenge for new players. With the addition of hyperdrive jamming when near enemies, new players should take extra precautions to make sure they are ready for the fight. More advanced ships will have no issue fighting Boss Swoks upon revisiting the outer rim.

Re-battling Boss Swoks increments the Roman numeral after his name. The numeral is server-wide and serves as a way to see how many Swoks are defeated on the server. So if a player beats Boss Swoks III, the next encounter will have the name of Boss Swoks IV.