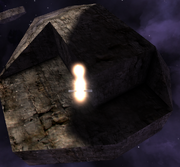 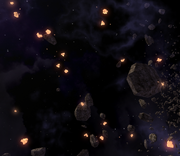 Iron floating in space after mining 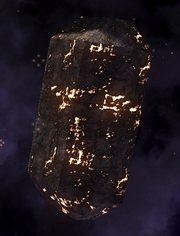 A field of asteroids including an iron-rich asteroid

Mining is the process of obtaining materials from asteroids.

To extract the resources, the ship must shoot the object with its laser. As seen in the above image, parts of the asteroid will be destroyed, dropping resources ready to be collected.

When the resources of an asteroid are depleted, it disappears. Some asteroids contain larger amounts of resources. They are noticeable even at some distance, as they have glowing veins of minerals on their outside. It is more profitable to search for these asteroids in each sector than it is to mine standard asteroids.

These are much bigger in size than standard asteroids, and have also a distinct shape.

Sometimes, certain asteroids have a large amount of resources hidden deep inside them, but are not distinguishable on the surface from normal, mineral poor asteroids. A Mining System will highlight these asteroids if it can detect that material on its own (so a mining system that detects up to Titanium will not detect hidden Naonite deposits). Mining systems can only detect a certain amount of asteroids at a time. all asteroids within the range of the mining system count toward its max detectable asteroids .

Certain high-efficiency mining lasers will not produce pure resources, but rather, extract ore that will require cargo space, and will need to be refined at a Resource Depot into usable material. Although technically goods, no stations buy or sell any kind of material ore.

If using fighters with raw mining lasers, it's beneficial to have either working transporters that allow fighters to collect cargo, or upgrading the mining carrier's loot collection range.

All material ores have a size of 0.02, and any Resource Depot can refine any ore.

Although each game begins with a drone that must mine on its own so that the first ships may be founded, as you progress into the game you will hire captains to drive and operate ships for you.

Doing this, you can have a ship mine all rich asteroids in a sector by itself. This will require a ship with the appropriate crew and at least one mining turret. Note that the ship will also require a mining upgrade to be able to see hidden asteroids if you want the asteroid fields to respawn.

Once your ship is properly set up you can have a constant flow of resources coming in.

the materials gained is

(Amount of resources in the block)*(efficiency of turrets/100)

however in vanilla it is uncommon to see Raw mining above 99.5 percent