Avorion is considered the pinnacle of materials, providing massive performance increases and durability for anything built out of it, aside from heavy armor.

Avorion is the most prized mineral known, only showing up near the center of the galaxy.

Being exceptionally durable, it is used in the construction of the most powerful ships known, and can be manipulated at the atomic level almost without issue. It refuses to be made into armor plating however, with Ogonite being superior in that respect. - Supports Generators, Energy Containers, Integrity Field generators, Shields, Hyperspace cores, Hangars, Inertia Dampeners, and Computer Cores.

- Avorion Hyperspace Core blocks allow you to pass through space rifts, regardless of block size

Where to find it[edit | edit source]

Found Near the core of the galaxy in asteroids like the picture below. 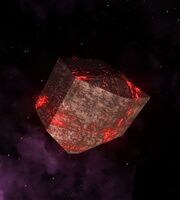 Can be sold to vendors for credits.